The "Severn Across" 400 km Audax and Mike’s new cardy

Last Saturday saw the Willesden host the 400km round of our Audax Super Randonneur series. Chris Beynon did an exemplary job of organising the event and producing a very clear and accurate route sheet. The entry card was full and Chris was obliged to close off entries several weeks prior to the start. The popularity of this event meant that the reserve list grew longer with each day.

In total 70 riders took part and among them were 14 Willesden members. The ride started in Chalfont St. Peter and went via controls at Woodstock, Tewesbury, Chepstow, with a final stop Membury Services on the M4. Along theway it takes in the legend/leg-end that is Yat Rock (20% average gradient). 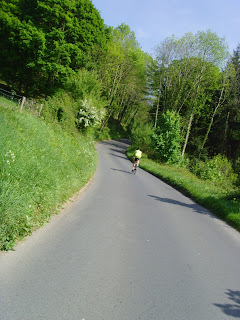 Conditions on the event proved cold. As the day wore on (and I wore out) it seemed to get much colder, with a northerly wind causing much of the damage. Over post-ride tea and cake Mike Ellison told us that he began to suffer from hypothermia during the night section. John Williams who was riding with Mike takes up the story

“ It was after midnight and the temperature had plummeted. We were both suffering badly from the cold, compounded by fatigue. Our lack of warm clothing was a real handicap although the fact that I am naturally more insulated than Mike gave me an advantage. Mike was definitely getting hypothermic and we were both starting to worry as the next possible place to warm up was in Henley. “

“So, with great presence of mind, Mike spotted a pub that was having a lock-in and bowled in begging for old newspapers to stuff down his jersey. Not only did he get newspaper, the landlady also gave him one of her husbands old jumpers that she didn’t like any more! “

“Meanwhile, I had to explain to the assembled drinkers what Audax was all about. Bemused sums up their reaction. Just how do you explain that you’d prefer to sit on a bike for 23 hours in the freezing cold rather than stay in a cozy pub that locks you in?”

The time limit for the event is 27 hours, however Mel Kirkland must have spotted something good on the telly as he arrived back first, despite being over 30 minutes late at the start. Mel covered 250 mile course with 3,800 metres of climbing in around 17 hours.

At the other end of the scale were the trio of Kelly, Brooking and Davies, who were combining the Audax with an in-depth survey of coffee and bun offerings from all the cafes and service stations along the route. They rolled in with about 10 minutes to spare, with the excess caffeine proving particularly helpful in covering a largish distance in the last minutes of the event.

The Willesden Youth Development Squad (Jack and Karl) were last seen at Woodstock. It turned out that they had to pack due to mechanical reasons and took the train home instead. 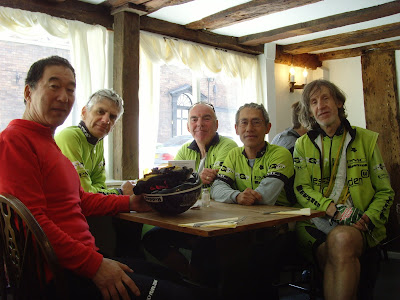