Round the year Randonneur – August

Mark and Wendy continue their quest for the Audax Round the Year Randonneur award. For added challenge they decided to go for a 300km event for August’s ride. Here’s Mark’s report and photos.

The Mildenhall Rally was the start point for a 300km East Anglian Diagonal.
Mark, Jim and Wendy stayed over at Barton Mills Travelodge – a few miles from the start.

We had a quick look around the Rally site – it was not yet in full swing but was pretty busy on the Friday. Having located the start point we Adjourned to the Blue Bell for some sustenance. Wendy had a bottle of red all to herself to ensure a good (short) nights rest.

Multiple alarms went off at 03:00 and Mark scoffed half a kilo of Tesco pasta salad before waking up properly.

Bags packed in the car we rode to the start Jim had decided to ride with us but (he sensibly diverted back to base after 50km in the cold darkness of predawn).

There were quite a few takers for the longest ride of the day. As usual after the start a blistering pace developed to the first control at 28km (into a headwind).
After turning and with a favourable wind we pedalled into the sunrise with other riders for company on an occasional basis.

At Breakfast time we said goodbye to Jim and shared a sandwich after a stretch of flooded roads in the forest. It was 70 miles to the first sit down feed at Diss – we couldn’t quite make it without a top up.

It was a comfortable ride after the dawn chill evaporated – Blackberry and apple pie at Bungay Butter Cross Café slid down well a mere 20 miles further on than breakfast.
We had a short ferry crossing at Reedham before a headwind slog to the boat station at Ranworth.(214km) Wendy’s first sub 11 hour 200 ! 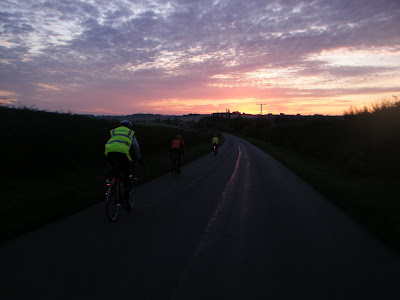 Wendy leads the way in the pre-dawn light

The next section showed evidence of the heavy rain that was to come and the ride up the coast to the next control was straight against
a very strong coastal breeze. Jonets café at Mundesley was a welcome sight! 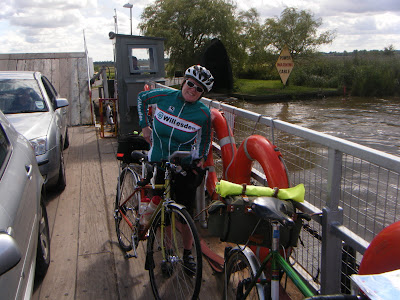 Wendy on the ferry

Here a small groupetto formed and decided not to go for the optional control at Cromer but to head west to rejoin the route which at this point was already over distance. We all got caught in a heavy downpour with no cover which dampened the spirits.

The garden centre at the next checkpoint was closed but a general store provided proof of passage. So off into the gloom for the last leg which was also one of the longest and most remote.

We found Craig (riding his first 300) trying to make adjustments to cater for a broken spoke and helped out and stayed together to the end. He had a GPS system and the last 20km on the route sheet was actually 40! Not good news on a small forest lane in the dark looking for a left fork after a crossroads. Craig started to bonk – so Wendy plied us all with Jelly Babies which proved to be just enough to get us back.

Mildenhall was a welcome relief – the route we had followed was 328km – a bit over the top.We finished at 23:10 – many thanks to the controllers who were still on duty when we arrived.

Thanks to Jim for driving us home afterwards and for support on the later stages of the ride. Next time two nights at the site would be a good idea.

One Response to Round the year Randonneur – August