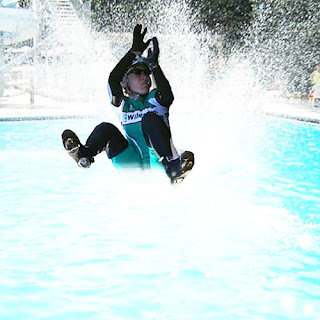 Well, it was a bright but chilly day, a bit of a westerly but nothing me and Betty the Bike couldn’t handle. So that’s the Met Office report out of the way.

It was carnage, absolute carnage! The ambulance arrived, got a pay-and-display, and stayed for the day.

Lance Woodman raced with the 4th Cats . He had a good race and managed to miss the pile-up of young aspirants as they went for the sprint. Nasty broken collar-bone for my coach’s son, Gavin Percy. John Percy is also currently nursing a broken collar-bone from skidding on the ice a couple of weeks back. It’s Mrs Percy I feel sorry for, now as much as ever.

I was in the 3rd Cat men with Peter Dixon. Richard Jerome is currently a victim of a particularly beastly cold ( full reports on the hour via Facebook) and Richard Cooper is doing up his kitchen ( full reports on the hour via Facebook). None of the breaks succeeded, and we went round mostly in a rather cosy, tight bunch, probably for warmth. I saw Peter darting about, usually very well placed, and sometimes driving the pace up on the front. I got on his tail for a few laps until I got bored and dropped to the back. He was right up there in 5th for the final sprint, but was had by a few horrid sprinter-types and came in 13th.
I decided not to contest the final sprint and throw myself on to the track instead. A couple of chaps lay down with me, in a platonic kind of way.

Then it was time for the E123 race. I didn’t watch much of it as Lovely Alison was coming at me with tweezers, hunting for gravel. Luckily, after only about 5 laps there was another crash which left 3 riders motionless on the track. This distracted her and I made a swift getaway up the Uxbridge Road.