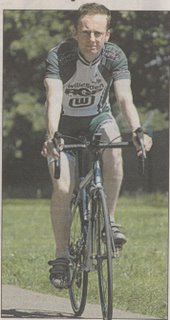 Michael Dunne joined the WCC earlier this year to train for the Etape. He has not had much previous cycling experience and has made remarkable progress. Last week he was featured by Charlie Chute in the Willesden & Brent Times. Here’s Charlie’s report

The world’s top professional cyclists struggle to make it round the Tour de France, so what chance does a schoolteacher have? Michael Dunne hopes to ride a 117-mile course starting at Gap, in south west France, climbing three gruelling mountain passes, and finishing on the summit of Alpe d’ Huez.

The 33-year-old is participating the Etape du Tour on July 10, which is a replica of stage 15 in this year’s Tour de France. He will ride with about 8,500 amateur cyclists from around the world. Michael, a transition teacher at St Mary’s RC Primary School, Canterbury Road, Kilburn, said: “I have always been a fan of the Tour de France and after running the Flora London Marathon last year I was looking for a new challenge.

“Once I learned this year’s Etape finishes on Alpe d’Huez, cycling’s most famous mountain, I was determined to participate as the route changes every year and the opportunity might not arise again for several years.

“I hope to complete the Etape in about 10 hours, but it is difficult to judge. There are no mountains to train on in Britain which compare to the Alps.”

Michael is raising money for Get Kids Going, a charity which helps disabled children take part in sports such as tennis, skiing and rugby, by providing specialist equipment.He said: “Having felt the health and social benefits of taking part in sport over many years, it is important everyone, regardless of their disability, has the opportunity to participate in sport.”

Michael, a member of the Willesden Cycling Club, has trained for seven months and cannot wait for the event to begin. He said: “I have been told that the atmosphere is fantastic among the cyclists and crowds line the route to cheer you on.

“I am, of course, looking forward to riding the same mountains as the Tour de France greats such as Americans Lance Armstrong, the seven-time winner, and Greg Lemond. I also cannot wait to reach the finish line, get my medal and relax for summer.”