PBP is one of the oldest events in cycling and probably the most prestigious in the world that the average cyclist can enter, with cheering spectators right along the course. Whether you’re a newbie or a grizzled ancien or ancienne, now is the time to start thinking about the next event, which is on August 21-25th 2011. About 20 WCCers have taken part in the last few PBP’s, can we better that in 2011?

It’s simple – all you have to do is ride a little over 1200km in no more than 90 hours, all stops included. Most of us who do it are neither especially young nor especially fit and complete the ride with a bit to spare. There is an official PBP website in English which gives details. 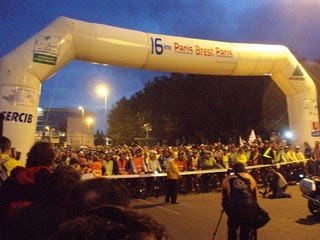 Willesden CC organises a qualifying series and provides support (Support team members needed!) to its riders during the event.

Help is also needed for the qualifiers, especially the Beast from the East, which needs a team to help with the sleep stop in Yeovil. If you do help an event, you can ride it on a nearby date as a PBP qualifier.

You have to qualify by doing four rides, one each of 200, 300, 400 and 600km between January and June at an average 15kph. As numbers have reached the limit that the organisers can handle, there will be national entrant quotas set for the first time in 2011. Riders who have done a pre-qualifying ride in 2010 of 200km or more will get priority, but it is likely that the UK quota will be large enough for anyone to enter who wants to. The quotas will be announced in early 2011. You will also need to take out membership of Audax UK 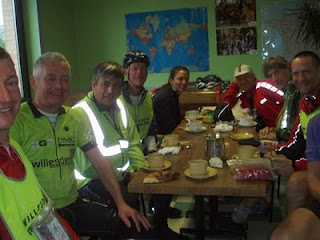 The Willesden Posse dosing up on coffee before tackling night three.

200K The Willy Warmer. Starting from Chalfont St Peter 07:30 22nd January 2011. Across the Chilterns & Newbury Downs. A revised route this year for an even nicer and easier ‘ride round ride’ to bank those winter miles to: Chalfont-Pangbourne-Lambourne-Kingsclere-Winnersh and Chalfont. Organiser Paul Stewart.

If you want to ride the 200K and attend the Annual Dinner, which is on the same day, please contact Paul about riding it on the 15th January. (The 100K Little Willie, run the same day, finishes in plenty of time).

300K The 3Down. Starting from Chalfont St Peter 06:00 2nd April 2011 Across the Chilterns, down the Test Valley, across the New Forest and then turning back. Controls at: Chalfont St Peter-Pangbourne-Kimbridge-Fordingbridge-Linwood-Sparsholt-Winnersh -Chalfont St Peter. Hilly stretches alternate with long flatter intervals, making this ride suitable for trying a big distance the first time. Organiser Ian Oliver

400K The Severn Across. Starting from Chalfont St Peter 06:00 30th April 2011. Severn Across takes in the Cotswolds, the Forest of Dean and the spectacular ride across the Severn Bridge before a stretch of night riding. Not flat, but only a few serious hills. Organiser Chris Beynon

600K The Beast from the East. Starting from Waltham Abbey, Essex, 06:00 28th May. To Taunton and back over Salisbury plain. Tracy & Di’s award winning

catering at Streatley Hill and Middle Wallop, sleep facilities and high-quality refreshment in Yeovil will help power you to the finish of this great tester for PBP. The food at the start and end and these three stops is included in the fee. Organiser Mark Brooking.

There will be awards to riders who finish all four events. 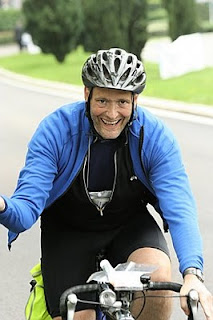 This entry was posted in Audax, PBP. Bookmark the permalink.