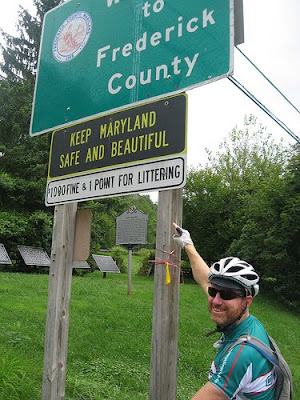 Rick is an Audax rider Mark Brooking and Ray Kelly met on the Mille Miglia last year. He also happens to be the same rider who crumpled his titanium bike into a ball on this year’s LEL. After a trip to hospital he finished the ride on a borrowed bike.

Rick is the proud owner of a WCC jersey and sported it on a two back-to-back 246km Audax rides in Maryland last week. The two days composed of 306 miles, and 20,000 feet (6100 meters) of climbing. Rick rode with his buddy, Bill Beck , and has posted a load of pictures on –

Rick says “I honored the Willesden brand during its inaugural outing – with a Coors beer and a Starbucks Frappuccino (part of a balanced rando breakfast…)”. See photos for full details of his calorific intake.