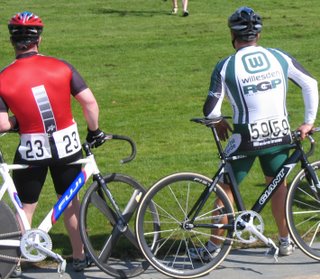 Roger Woodford was Racing for the Willesden CC. In the 10 lap Scratch Roger was boxed in until 200M to go but still managed to get 3rd place. In the 10 mile the the pace was constantly high throughout. This discouraging any significant breakaways forming but many were losing contact unable to keep up the high tempo. Roger won 2 of the bonus sprints for some extra prize money.

Then with just 2 laps to go Johnny Torrez attacked the bunch and quickly gained ground. With 1 lap left John McClelland sensed it was now or never and started his long sprint for home. As soon as John came past Roger kicked for home as well and it was a drag race to the finish.

McClelland caught Torrez on the line to win. With Roger closing very fast on them both but finishing third. It has been Rogers most successful year at Welwyn Track League and he finished 6th overall in the “A” League.

This Friday Roger will be racing at the World Masters Track championships, details of which can be found at http://www.cyclingmasters.com/ . This is the world championship for the over 30’s. With a Bronze in the National Championship this year. Roger is hoping for another medal winning performance.

Reigning west London Sprint champion Dave Dentus will defending his title at Palmer Park this week. With Roger entered as well hopefully it will be an all Willesden Final!