The Chopper and The Willy Warmer

The WCC’s first event of our SR series took place on Saturday. A very well attended run, with Steve Abrahams, turning it into a 700km ride by adding on a 500km commute to and from the start. Conditions were looking good for January with no sign of rain and little wind. However as the ride approached Pangbourne a narrow silver of black ice claimed a number of scalps. Organiser, Paul Stewart, takes up the story

“I think there was one only patch of ice in the Chilterns yesterday but we managed to find it, with several riders falling. Douglas Aspinall and Edmund Spurgeon had particularly hard falls.”

“Douglas fractured his hip and was extracted by air ambulance. Edmund feeling battered but mobile made his own way home via A&E where he was diagnosed with a cracked pelvis. Edmund tells me that as things go it’s quite minor and will mend itself over the next six weeks or so.”

“I’d like to thank everybody who took part yesterday for their support, with special thanks to Danny Fisher for acting quickly to warn oncoming riders of the ice, and Ray Kelly & John Wheatley who stayed with Douglas until the ambulance arrived. Most of all I’d like to wish Douglas and Edmund a speed recovery.”

John Wheatley also reported that a large horse with rider came close to sliding on the ice and taking out Doug’s entire rescue party! More excitement followed when the helicopter arrived, causing an out break of deadly plane spotter disease. The helicopter crew came under close questioning as to where the helicopter was based with many riders/spotters speculating it must have been from High Wycombe (it was actually Benson).

The accidents overshadowed what was a very well organised event by Paul. He even ensured that the helicopter turned out in Willesden colours! 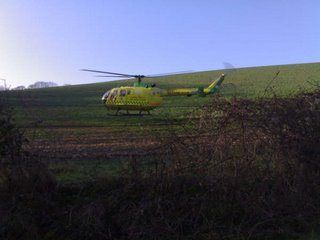