Squadra Verde vs The Dragon 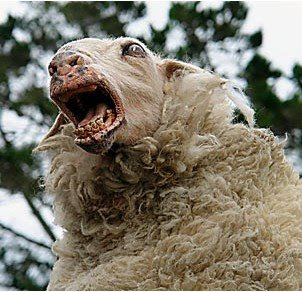 So I’m gliding down Bwlch when a scooter rounds the bend ahead, whining and tooting aggressively to scatter a brace of sheep by the opposite verge. This was potentially disastrous, as you can imagine: I’m travelling at more than 35mph, with a startled sheep trotting into my path, and it’s watching the scooter. I’m squeezing the brakes as hard as I dare, wincing now as it gets closer and closer – it’s like a nauseatingly fast zoom – and it’s still watching the bloody scooter! DON’T LOOK AT THE SCOOTER, LOOK AT ME! LOOK AT ME, YOU WOOLLY BASTARD!

This is one of those ‘when-time-stands-still’ scenarios and I’m – ahem – carefully weighing up my options:

1) Lean the bike over and slide into the sheep. This will damage new bike, me, and cripple the sheep. But I will survive.

2) Turn into the verge and hope the grass is not concealing rocks, as I suspect. I will probably survive, with some unpleasant breaks. Bike will be bent, sheep will be unhurt.

I picked the third option.

I’d say we were about a second from impact when the previously fairly cool sheep finally turned, assumed an “Oh shit!” expression and sprang instinctively away. I was relieved by this: “Cyclist merges with sheep in mountain collision” is not how I’d like my death reported in the papers. “100-year-old grimpeur expires triumphantly after final ascent of Alpe D’Huez” is so much more appealing, don’t you think? Dragon 1, Squadra Verde 0.

The Dragon Ride proclaims itself the UK’s largest cyclosportive. Note, largest, not toughest – Christ knows what the toughest is like. Starting from an industrial estate on the fringes of Bridgend, it winds through the former mining valleys of Ogmore, Rhondda, Swansea, Neath, Afan and Garw, taking in two ascents of Bwlch along the way; just for good measure, they’ve thrown in a loop of the Brecon Beacons, including the Rhigos (like Bwlch, a Category 1 Tour of Britain climb), and a final, leg-crunching ascent of Llangeinor Mountain before you roll into the finish, fairly knackered, 117 miles later. According to Rich Cooper’s Garmin, the total ascent is 3,212 metres.

This year, 3000 riders took part, including several Willesdens. Rich, John Williams and I squeezed into Barry (yes, that’s what Jayne calls her van) for the journey down and stopped over at the Cardiff Travelodge. During the ride, we also bumped into Hippy and Phil and glimpsed a hollering Mike Ellison as he whizzed past us, going down a mountain the wrong way. What is he like??

The parcours was fantastic – the climbs challenging but manageable – and the views and the countryside were breathtaking from start to finish. Our sense of journeying through a rural idyll was probably helped greatly by weather that could not have been more perfect; it was warm, but not hot; sunny, but not blazing – lovely cycling weather. Along the way, there were several firsts for our intrepid trio: for Rich and me, it was a first 100-mile ride, our century celebrated with a manly handshake on top of Bwlch; for John, even after so much riding, the Dragon gave him his first taste of ‘proper’ climbs.

Our time – 8 hours, 4 minutes – was respectable but hardly spectacular. But that’s not the point, is it? We drank it all in from start to finish. We took our time at the three feed stops (bananas and High 5, yum), enjoyed the applause at the top of every climb, appreciated the lush serenity of the valleys, the wildness of the mountaintops and the camaraderie of our fellow cyclists – and we stuck together all the way. As it turned out, the sheep was the only blip in an otherwise perfect ride, and even that was funny. Isn’t this why we ride our bikes, for days like these? Final score: Willesden 3, Dragon 1.