Mark Brooking has sent me the second installment of his RTYRA (Round the Year Randonneur Award), which he is doing with his tandem companion, Lynn Corr. The RTYRA involves riding a 200km Audax each month during the year.

Last weekend Norfolk was the victim of their ambitions.

A tale of a dirty weekend in Norfolk.

Throughout the preceding week the forecast was not brilliant – Max temp 4 Degrees Min -2 degrees with a strong NNE Wind straight off the North Sea.

Saturday proved dry & still. After an Olympic Breakfast accompanied by a decent caffeine hit, we were off to the start at the John Innes Centre near Colney. There were 50 entries for the 200 – most of whom seemed to have made it to the start.

The first section was laney & undulating to the control at Lodden and we soon warmed up managing to clock the info control en-route without stopping. On the next stage it started to snow quite heavily and on one right hand bend, in the lightly snow covered road, there was a clear imprint of a rider…! Naturally this encouraged us to negotiate the corner gingerly; by the time we made it to The Goodies farm shop control at the quarter way point, the weather had changed again. 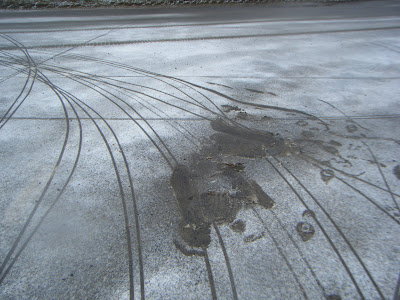 On the next leg the sun came out and we watched the local hare population racing around the adjacent fields. The minor B roads used for this section were clear of ‘Slud’ (A glutinous mix of Sleet & Mud) and progress was rapid.

The last 17km back to the HQ was directly into the rising chill of the anticipated NNE wind. The last 400m to the HQ ended with a monstrous climb, hampered by two sets of traffic lights.

I was all in: cold, damp and totally ineffective – I can’t imagine what the stoker was thinking at this point. After hot soup, rolls & Tea with more Tea, I felt quite bilious and made a hasty retreat to the Gents. Fortunately lunch stayed were it was most needed and after 5 minutes with a hairdryer hose stuck down the front of my jersey, I felt ready to continue. (If this was Woman’s Weekly, it’d make it has best ‘household’ tip of the week!). We took it easy until I was gastrically totally settled down. 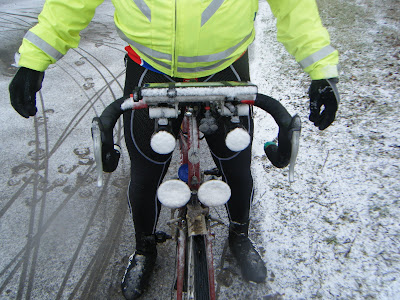 Snow and ice forming on all leading edges

The change of direction was away from the wind with ample tree cover. We slowed briefly to witness a herd of deer cross the road in front of us – white bottoms flicking up & down in unison across the fields. We had to keep an eye on the time as the Garden centre control at Fakenham closes at 17:00 and hot sustenance was essential. In spite of the conditions we made it to the control at the predicted time, where Lynn had two hot chocolates with cream & a bit of flan. Well deserved after nursing the ailing windbreak (should that be the other way around?? Miles B.) along the last stage. A welcome change of clothing and into the last leg back to base in our new position as Lantern Rouge.

The sun set behind raggedy clouds and now the challenge was to stay on the road/read the route sheet/avoid the worst sections of frost damaged lane.I had spent most of the day peering over glasses that were either covered in snow or misted up so my eyes desperately needed/wanted to be firmly closed. Lynn’s cheeks began to glow from the relentless pounding as we approached the final climb to the control. This time it was climbed with ease without even changing gear!!!! 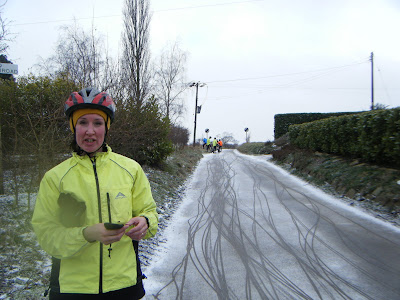 Lynn and some Norfolk road spaghetti

A 12 Hour outing came to a close. The good thing about being last is that you get plied with all of the leftovers. We crept back to the lodge and a few beers brought the day to a close.

Everything used during the day was filthy. Little piles of grit appeared in strange places.

Next ride will be Boudicca’s Revenge in March. Maybe it won’t snow this time?