Mark Brooking continues with his monthly reports on the RRTYA challenge, which he is doing with Wendy Mears. This particular Audax award requires riders to complete a 200km Audax each and every month during a year.

A ride with an awesome reputation for steepness furthur complicated by its
early season location on the calender. This years edition saw Mark Brooking, Chris Beynon & Peter Turnbull brave the early morning chill from the day’s NNE wind to join the peleton for the first stage of the ferry dash around Poole harbour. 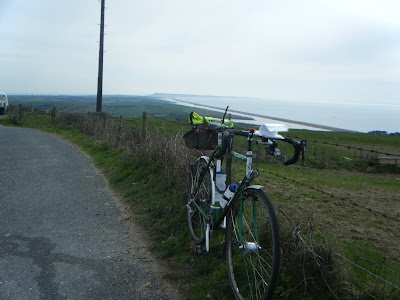 View of Chesil Beach (and the Brooking bike) from the top

By devoius means Mark avoided the crush to leave the ferry and lead the ride for the first few miles in a brief moment of glory before the onset of gravity at Studland saw him migrate towards the back of the field for the rest of the event.

It was (for a change) a glorious day for the ride with a favourable wind all the way to Axminster.
I made it to Weymouth and scoffed my onboard second breakfast – provided by our hotel who now understand my needs.

Various riders commented that they hadn’t seen me go this fast for a long time.
Little did they know that Willesdens champion foodie was on a mission:-
Part of the 3 night deal at the hotel included DINNER, bed & breakfast and it was paid for
So a brisk finish was called for.

So far I was matching last years pace, the next section had most of the nasty climbs – would my dodgy leg hold out? Yes it did – and for the first time this millenium I rode up every hill and cruised into Axminster well up on the previous years ride. Not walking had gained me half an hour in the hardest 20km of the ride.

The ladies at the School Control in Axminster did us proud yet again and suitably refuelled I headed for the infamous Sector lane and a possible headwind to the finish. Strangely the wind wasn’t really a problem and I stopped at the top of the highest point on the ride at Eggardon hill to admire the vista of West Dorset and a clear view of the lumps & bumps covered earlier in the day. 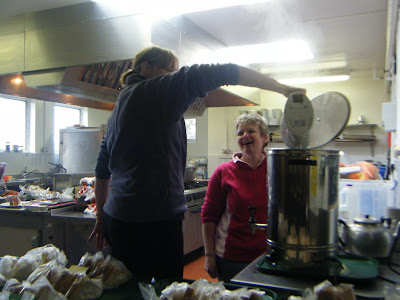 The ladies at the Axminster control perpare for the challenge of feeding Mark!

A quick whizz down the Roman road to Dorchester for Something with Custard at the Top ‘O’ town Café before the home straight. It took just over an hour to cover the last section of 24km to get back to the finish at Wareham Quay.

Back to base and showered ready for a 19:30 dinner. I won’t be going that fast again until the same time next year!!!!

Mark Brooking & Wendy Mears rode this one Jim Mears rode the first 64km out to Wallys Café at Acton. Peter Turnbull & Andrew Deaner were also there but soon dropped us.

A warm & sunny day out with about 2000m of climbing in it. With three sit down feeds we still managed to get around before dark It was a close thing – would we be Lanterne rouge again?
There were 3 riders behind us at the penultimate control and they passed us on the climb up to little Baddow right at the end. However they were following a GPS track and within sight of the end we encountered one of them riding towards us telling us we were going the wrong way!!!
Technology had sent the rider off around the course again so we made it home in record time for Wendy – and we weren’t last this time!!

Yours until next Month, Mark Brooking