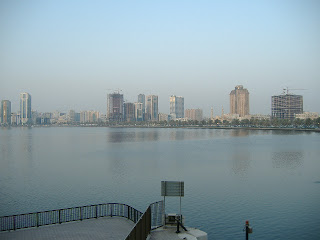 I’ve been out in Sharjah, U.A.E. for nearly two weeks now and have settled in to the hotel and office. The beginning of my stay has coincided with hottest part of the year (low 40 C ) and Ramadan, so timing could have been better, but prospect is for it to cool off a little during September. All the eating places are closed during daytime during Ramadan but most will do a take away that can be eaten out of public view, and of course it’s “dry” though there are a few hotels & bars where a glass can be raised. I visited the Irish Village bar in Dubai last week for a good pint of extra extra cold Guinness with some folks from work.

The hotel is pretty comfortable and I have a sink, microwave and fridge/freezer in my room. The hotel gym and swimming pool are being refurbished and should re-open in September, however staff don’t seem able to confirm a date and until then there’s only two running , cycling and multi-gym machines. I tried a run by the lagoon (see pic) this morning at 05:45 and it was just about bearable at a steady pace.

I visited a work colleague of Paul Stewart at the weekend in Abu Dhabi. He cycles regularly with the local tri club and has a spare bike so we joined in with the Friday morning group at 05:30 for approx 110km of completely flat roads including lots of 3 lane highway with some smaller roads with little traffic once away from AD. Even the local guys said it was very hot by 08:30 and I was pretty cooked by the time we finished an hour later. On Saturday we had a short cycle followed by a swim at a good beach near the Sheik’s palace. I later visited the Grand Mosque which was v impressive before heading back to Sharjah.

I’m in the office today as it’s the first day of working week over here. I was originally due to return to UK on 5/11/09 but it seems likely that project duration will be extended, possibly into December, in which case I will come back home for 2 weeks and then return to UAE for further stint.

Hope the weather is/was OK for you over the bank hoilday. I shall miss audaxing in UK during the autumn.