The 2007 running of the PBP proved to be a tougher challenge than normal . The Willesden CC team arrived home sporting a variety of injuries, ranging from hypothermia, projectile vomiting, trench foot and temporary blindness, through to a broken jaw and the spontaneous growth of a third testicle! As well as squaring up to 1227 kilometres of riding within 80, 84 or 90 hours (the PBP organisers thoughtfully offer three levels of masochism), riders also had to contend with British style summer weather, specially imported into France for the event. Though the rain was abundant, fortunately the accompanying winds were not strong, nor temperatures too low.

The Willesden CC began to assemble at the accurately called Parc Etang campsite from Saturday 19th August, where our wet weather acclimatisation process began. The first rain storm arrived overnight on Saturday. I awoke in the morning to find the roof of our two person tent sagging down to towards my nose. The cause was over 10 pints of water that had accumulated there overnight. Daylight also revealed that the campsite had acquired a number of new “etangs”, the largest of which cut off the WCC camp from what was laughingly called the shower and toilet block. 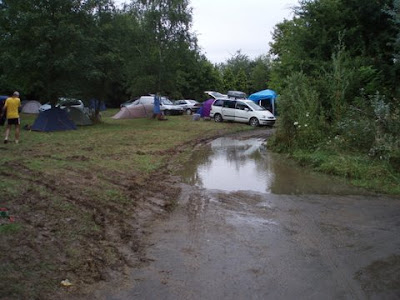 The rain continued on and off through Sunday causing the PBP organisers to abandon the bike check that normally accompanies the PBP signing on process. As Sunday progressed into Monday our campsite quickly descended from Parisian turf to Glastonbury mud. Despite the conditions the Willesden Support team of Vyv Baker, Wendy Mears, Jim Mears, Keith Elliot, Marianne Harding and John Devine did a superb job of setting up the WCC field kitchen, regularly dispensing hot drinks whilst treading ankle deep mud. On Monday evening they served up a full pre-PBP meal for over 26 people from the midst of the mire. Respect guys! 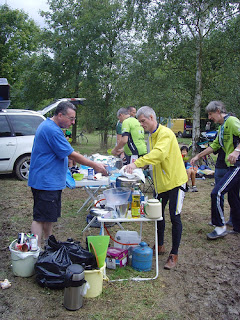 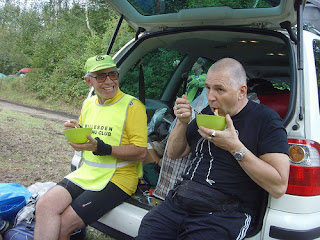 First riders away to Brest are the sub 80 hour “Vedette”, or Star, class at 8pm on Monday evening. This year we had two riders starting in this group, Martin Lucas and Mel Kirkland . At 9:30pm the 90 hour randonneurs were scheduled to leave. This group comprises of the bulk of the PBP entry, with over 4,000 riders departing in five main groups. First time Willesden PBP riders in this group were Liam Fitzpatrick, Ian Oliver, Minoru Mitsumoto and Akiko Kawachi (who was on PBP Support duties in 2003). They were joined by PBP anciens – Bob MacDowall, Mark Green, Yoshi Sekido, Dennis Falvey, Andrew Deaner, John Davies, Ivo Miesen, Peter Turnbull, Tim Wainwright, Norman Lazarus, Ray Kelly and Mark Brooking. 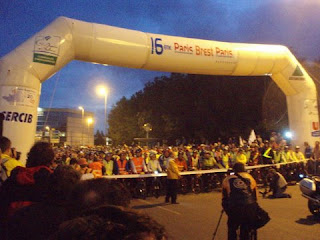 Ready for the off
Mike Ellison, this year realised he needed more beauty sleep and was starting in the Super Randonneur class at 5am Tuesday Morning. He was on hand to guide PBP neophytes, Steve Ayres, John Williams and Darlene Rini who were all gunning for a guts-or-glory sub 84 hour time.

The 9:30 pm start proved a little chaotic, with a huge queue to get to the start line. I, along with Mark B., Akiko and Ray were in the last group to get away at 11:20pm after 2 hours of standing on our feet. However the queue was well behaved and we passed our time chatting to other competitors and trying to keep the Mexican wave going around the stadium. As we waited the rain came and went several times. We were eventually called up to the start line just after 11pm, but still had to endure a number of speeches and we finally got away at 11:20pm. As we left a big fire work display lit up the damp Parisian night and hundreds of spectators cheered us on our way.

The first part of the night ride was dry and it quickly became clear that the Parisian rain had been located mainly to the PBP start area. As the night drew on it became progressively warmer, the clouds began to disperse and reveal the stars. I thought that the weather had turned and we would be in for a warm and dry ride. My optimistic prediction held good for a least the next 45 minutes, when it was finally dissolved by a serious down pour. I would not see dry feet for another next three days.

The first official Control is at Vilaines, where Marianne, Keith and John Brooking were waiting for us with breakfast. It is such a great morale boost to meet your support team especially after a night paddling and pedalling through the French country side. As soon as riders arrived Keith and Marianne provided a hot breakfast, drinks and water bottles were replenished. Excellent service! 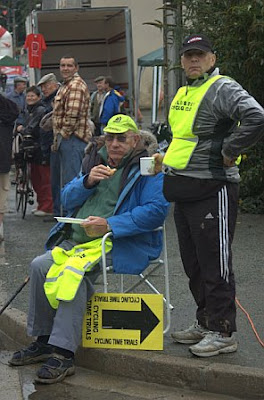 Willesden Support at Vilaines
During the day the French people were as encouraging as ever on this wonderful event. They had set up a number of coffee and hot chocolate stalls at the side of the road to keep us warm and awake. This year, we has an additional and unusual group of on lookers, thousands of 10cm orange slugs who had made their way out of the fields, only to be sliced in two by 5000+ pairs of Brest bound wheels. 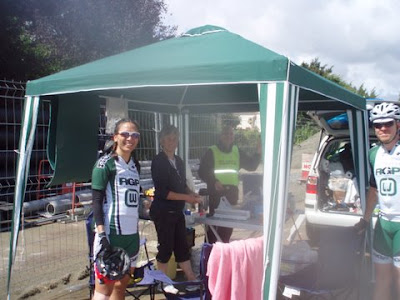 Occasionally the sun did shine.
The major WCC Support was positioned at Loudeac, 450 kms from Paris. Here the support team had set up a camp in a municipal park and pitched tents for riders to grab a few hours shut eye. The menu was impressive with steak, eggs, beans and fresh vegetable soup on offer. As we pushed on towards Brest the weather improved. Shortly we were to meet Martin Lucas and Mel Kirkland as they sped back to Paris, some 200+kms ahead of the rest of us. 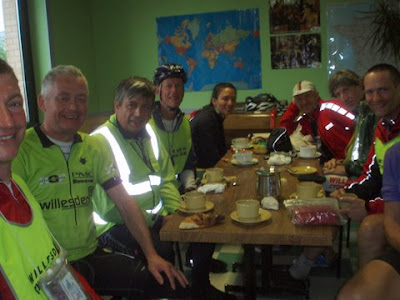 Returning to Loudeac from Brest I stopped in the pretty market square at Sizun to meet Tim and Mark Green. Tim was suffering with a very painful and impressively sized saddle sore. It was clear he could not continue and decided to pack. I also learnt that Akiko had abandoned earlier suffering from the onset of hypothermia. Norman also packed at Brest. 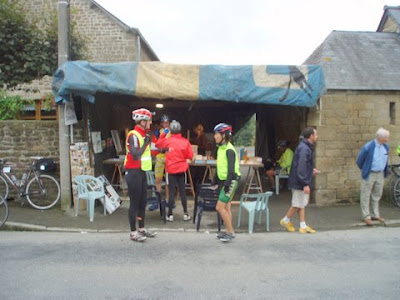 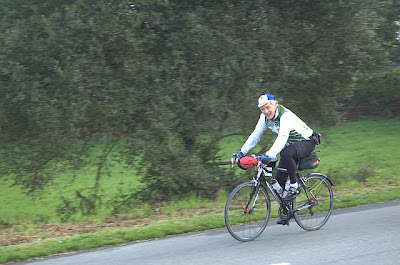 Tim Wainwright
We returned to Loudeac that night for our second stop at the WCC camp. Whilst the WCC team were keeping us going on the road, back home in the UK, Ray Ellis has been hard at work keeping the Willesden members and riders families up to date with the whereabouts of their riders via the WCC-PBP blog. By this stage we had also lost contact with Mark Brooking (now on his seventh PBP) and Ray Kelly. 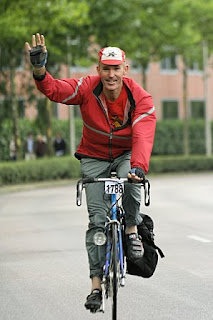 Martin Lucas. First of the WCC home
After we all left Loudeac, the team moved the whole support operation up to Mortagne for the final push for Paris. Arriving at Mortagne on Thursday conditions were drier and warmer than on the way out. The Willesden HQ were now based in a Sports stadium close to the control with the sleeping arrangements set up under the cover of the Grandstand. By this time Martin and Mel were back in Paris and fast asleep having finished their respective rides. Martin Lucas did a highly impressive 60 hrs 41 mins and Mel was second Willesden across the line with 67 hrs 11mins. We also learnt that Minora had packed, suffering from a temporary loss of eyesight and collapsed neck muscles

With under 200km to Paris we were practically there. At this point Darlene was beginning to suffer terribly from inflamed tendons and saddle sores. She was coaxed along by John W., Steve and Mike and reached Paris despite the obvious pain that she was in.

From Mortagne I rode with the much admired Audax Italia squad. Famed for their immaculate kit, pristine bikes and glamorous female riders. I was able to tell them about the mad Brits riding the event on fixed wheel bikes, recumbents and Drew Buck’s 1901 two speed Hirondelle bicycle (featuring a backward pedalling low gear and accompanying onions). They were suitably impressed and also showed a great interest in coming to the UK in 2009 to ride the London-Edinburgh-London Audax.

The last control before Paris was Dreux. With only a handful of kilometres to the end in Paris, the control was in a party mood. Traditional French accordion music added to the atmosphere and some riders with surplus energy, or perhaps it was adrenaline, danced to the traditional tunes. A message from Vyv told me that Ray Kelly was our fifth abandon.

Dennis Falvey joined me for the final 20km in to Paris. He wanted to get the finish before 15:30, which led to an adrenaline fuelled high speed bit-and-bit ride to the finish. My lasting memory of this years ride will be doing 40KPH+ along the dual carriageways into the finish with passers by and motorists cheering us on, together with a highly excited and animated Dennis. Superb fun. 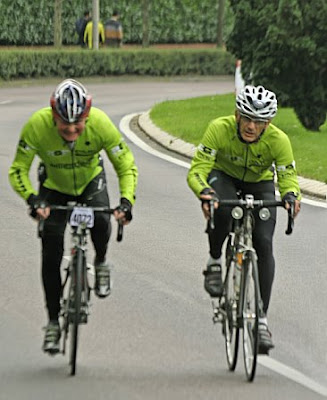 Dennis and JRD “sprint” for the line
Suddenly it was all over and we were stood in a 20 minute queue to surrender our brevet cards. The beer tent had run out of beer, but at least it wasn’t raining. I thoroughly enjoyed this year’s PBP despite the conditions. I forged so many friendships along the road with riders of all nations.

My thanks once again to all the terrific support we received from Vyv, Marianne, Keith, John, Jim and Wendy. They all worked extremely hard and often went with less sleep than the riders. At all times they provided great food and drink in the most difficult conditions all done with good humour and willingness.

Before starting this event I said that this would be my last long distance Audax. However watch this space in 2011.…

1.
Whilst Mike Ellison was riding back to the Dieppe following his successful completion of the PBP , he was involved in a collision with an unknown object. Mike has no recollection of the incident as he was knocked unconscious by the impact. He awoke surrounded by Gendarmes and returning home UK audaxers . His jaw is broken in three places and his bike in one place. I have since met with Mike and he is unfazed by the whole episode. His jaw is beginning to knit together and he hopes to be fully recovered in around 6 weeks time.

2.
Mark Brooking finished at 20:11 having shed most of his waistline with the effort.

3.
Ivo Miesen was our sixth Abandon. Though he was shown as finishing in third place with a sub 70 hour time, Ivo actually abandoned between Fougeres and Villaines. 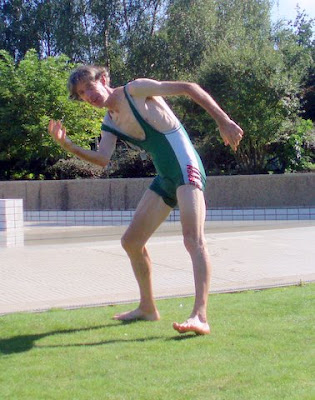 Mike reveals the secret of his form 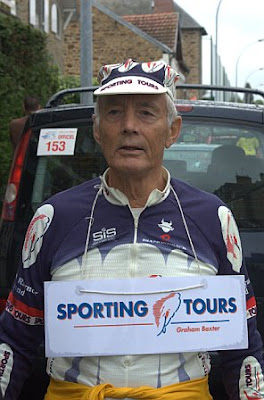 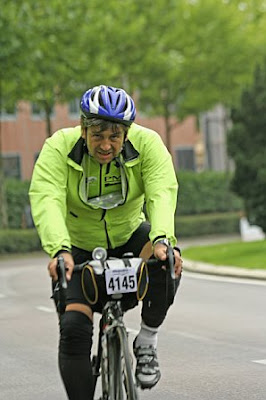 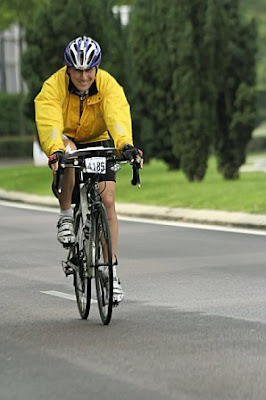 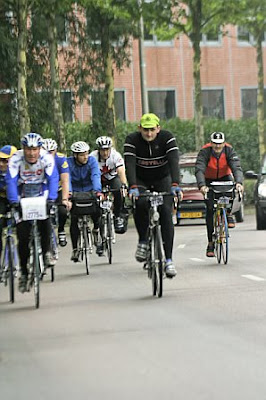 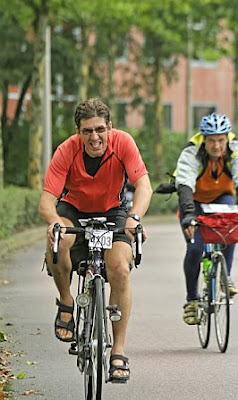 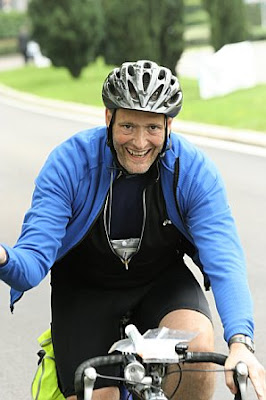 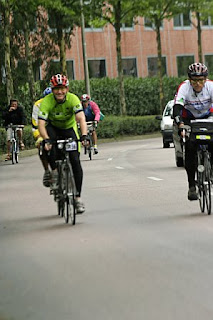 Andrew Deaner had a great ride. 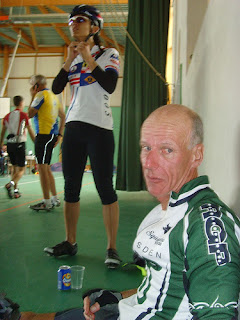 At the Brest turn Steve contemplates his strategy for final 600km. 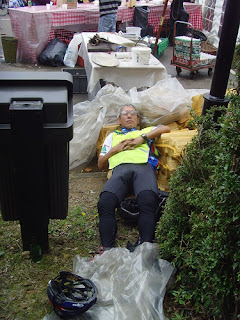 Job done, Yoshi thoughtfully arranges his body on the funeral pyre.
This entry was posted in Miscellaneous. Bookmark the permalink.