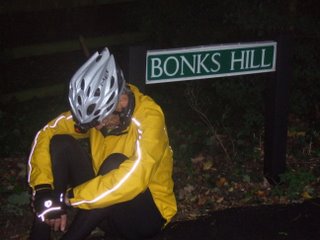 In preparation for next year’s Paris-Brest I had an idea that we should run a night time 200km Audax. This would give those new to the event some night riding experience, before the qualifying rides begin next year. As there were no such events on the Audax calendar we had to draw upon an Audax Permanent to provide the solution. Mark Brooking suggested using the “Midlands Mesh” 200km route and offered his home as both start and finish points.

On Saturday 2nd September, six of us met up at Mark’s home on a very windy Saturday afternoon. They were Wendy Earl, Hilary Pandya, Jim Mears, Lynn Francoli, Mark Brooking and myself.

I had taken the train up to Waltham Cross. The short ride from the station to Mark’s house was ominously blustery. Small branches were lying in the road and trees were angrily thrashing their arms at the wind, as indeed was I. The thought of cancelling the ride began to cross my mind, as conditions could prove dangerous if the wind were to further increase. Fortunately it proved to be a bit a last ditch squall and conditions settled down to merely breezy as we set off at 7pm.

“Loose chippings on the Road” said the sign and for the next few miles we ploughed along a scree slope passing itself off as a road. The already difficult riding conditions further hampered by darkness and the dust thrown up by cars, which swirled around in our lights. The night time newbies must have wondered what they had let themselves in for. Rather ironically the chipping ceased when we arrived at Chipping Ongar. On the positive side the wind was now behind us and we were wafted towards Saffron Walden was at a brisk but comfortable pace. I imagine this is how cycling must be if you are really fit and strong.

We got to the “turn” at Newmarket at about 1.00am where we were the object of much comment from the local youth tottering out of their watering holes. We entertained a few of the more curious revellers who asked what we doing and where we were going. They wished us well in a genuine but rather slurred manner.

By the time we set off for the return journey to London the wind had dropped and conditions were getting balmy. Showers began to appear near dawn, punctuating the ride with stops to “cape up” and then a few minutes later to “cape off“. Also a stop at Bonks Hill was digitaly recorded!

We arrived back at Mark’s house around 8am Sunday morning, with about 15 minutes to spare on time. Alison immediately produced a wonderful fried breakfast which went down a treat

Wendy, Jim and Hilary were new to night riding and seemed to enjoy the full Audax experience. I often heard them chattering and laughing as our little groupetto steadily progressed through the dark. They are now distressingly keen to repeat the exercise on a 300km ride in October. Their appetites whetted by the possibility of going for the Audax Round-the-year award.

A big thank you to

In the afternoon I went down to watch the ToB on the Mall. For some reason I fell asleep on the bus on the way home to Willesden!