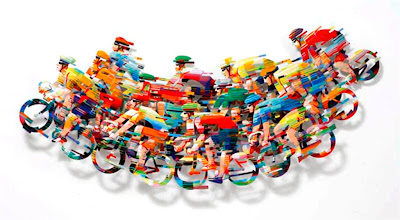 Seán Bannister has sent in a very interesting posting about a familiar lament of “Missed the Break again!”

Introduction:
Beyond the obvious signals that a break is about to go, in a bunched race, what can be done to help riders develop the necessary racing intuition?

An awareness of the situation is vital. Be aware is fine, being aware of what, where, when and how? How does one develop awareness? Pay attention? Wake up?

A recent television programme examining intuition presented the real situation of a blazing factory unit with the fire service in attendance. The fire chief had a number of his firefighters inside the unit. His training included knowledge of many warning signs of a blazing building collapse. None of these signs were present; however the chief withdrew his firefighters from the building which then collapsed. How did he know collapse was imminent despite no obvious signs? He

could only explain it as intuition.
The fire had been recorded on video, and detailed examination of these records, plus detailed debrief of all firefighters at the scene began to reveal previously unrecognised signs of collapse. This suggests that intuition works on signs / perceptions – not necessarily at a conscious level, especially in this case.

Further research with people known to be intuitive revealed extra brain activity, of which they were unaware, when in a rested state but concentrating on a particular event. This moves intuition from a black art towards a science, which by definition can be learned and developed. How?

History / background:
This author has engaged in two apparently different sports at an elite level; cycling and model flying. Model flying involved the design, building and flying of radio controlled gliders in competition. In both these sports the ability to evaluate operational conditions and then make good decisions was fundamental to competition success. Again, “how”, is a common question? The obvious signs and their identification is an easy answer. However intuition would often play a pivotal part in getting the extra edge. Explaining intuition, beyond the mere statement, is more challenging. The fire situation above has helped in answering the challenging “intuition” question.

Peripheral Perception:
Peripheral is the boundary or edge – not relating to the most important – incidental to the central focus. Often disregarded as inconsequential and unimportant but is the outer part of broad focus.

A parallel here is the opposite of tunnel vision within the sense of vision. Can you remember just catching something important out of the corner of your eye, knowledge that was most useful? Expand this concept from just vision to all of the senses; touch, smell, hearing, taste and vision. In a holistic sense we have the advantage that the whole is greater than the sum of the parts (sixth sense?).

Perception, the sense of insight or recognition, close to intuition, but not quite. This can be very personal – not necessarily in accord between different people. Taken that normal and obvious perception is fully functional, developing the whole width of perception, especially peripheral, will put any racing cyclist in an informed position. Invaluable and essential if good decisions are to be made. This perception is also in a constantly changing environment, needing a rolling strategy, and very often under distracting conditions of discomfort (physical stress and exhaustion).

Hence the concept of peripheral perception or awareness of the less obvious.

Combining these concepts establishes a valuable link in the chain of logic or continuum; cycle race (opportunity) > success (outcome).

The rider who misses the break every week needs coaching help. This assumes adequate fitness.
Can the rider know; what (the break), where (in the race), when (at any time), how (application)?
Now equip the rider with application “how” skills and the “what, where and when” are solved.

Here we go beyond the obvious – to the rider who gets in the break every week and probably only makes one move in the race to confirm their great skill.It can’t just be luck? Observers often say the rider has a “nose” for racing, races “intelligently” or is “intuitive”. How does the rider do it?

Getting practical:
Perception can be practiced at all times; even off the bike. WAKE UP, “be present”.
While on the bike; note where other riders are, what they are doing, the condition of their bike, their body language, what they say, where the wind is blowing, who is beside you (without looking to the side – clues; their smell, voice, (and even a peripheral vision peep!). The list is endless. These skills can be practiced and become second nature, even subconscious. This knowledge is the foundation of intuition.

The foregoing alone will not ensure success. Riders with these skills may be incapable of firstly making decisions from their well informed position and then executing those decisions effectively. Another day for all that though!