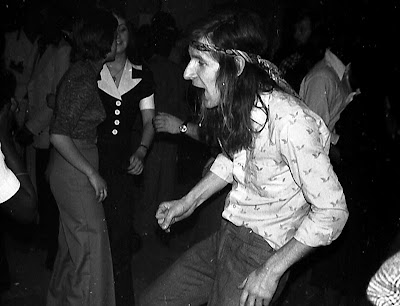 Mike is recovering from his broken hip but hopes to be at January’s Dinner and Dance to show off his legendary 1970’s dance moves.

I have been in touch with the ever cheerful Mike and here is his update.

“The recovery going as well as can be expected and expect to be fit
for D&D. Got withdrawal symptoms about not being able to ride the bike.”

The bone-heal time is supposed to be around 8 weeks so I should be
able to start putting some weight on the leg by now.
Keeping my fingers crossed.

In any event I don’t expect to get back on the road until the new year.
Got to go slowly to make progress quickly.

May be able to make November monthly meeting depending on results of
next appointment.

Should definately make the AGM. “

Mike’s accident happened in Douglas on the Isle of Mann. A good place to break a hip as I guess, as they are good at patching up bikers there. Here is Mike’s account of his accident –

“The promenade in Douglas has got tram lines. Now, we all know how dangerous they can be so I was being extra careful.

A chap went to open the door of his parked car. When he saw that it would block my path he immediately closed it and stood in close so that I would not be obstructed. As I moved out slightly to give more room I waved to thank him, and in the instant I took my eyes off the road it happened.

As you will appreciate I went straight down with no chance to do anything about it. I think my injury was more unfortunate than predictable. After all many riders fall off but very, very few break a hip. I landed on just the wrong point of the greater trochanter and it produced just enough force to snap the bone. Had my body been a couple of degrees either way I would probably have escaped with road rash and bruises. These things happen.

I have now been discharged from the fracture clinic but still have to attend physio. The prognosis, as I understand is general for broken hips, is that I can start to put weight on the bad leg but should expect it to take a further six to eight weeks before I can get off the crutches altogether.

I have been given the go-ahead to ride a trainer bike because that is not a weight-bearing exercise although I have been told to take it easy and do most of the pedaling with the good leg. Fun, fun, fun!

Under these circumstances I do not contemplate getting back on the road until the new year and then only in good weather, at least for the time being. I want to get in as much healing time (bone-hardening time) as possible before risking another fall.

Give my regards to anyone you see in the meantime.

It’s great to hear from Mike and we wish him a speedy and full recovery.