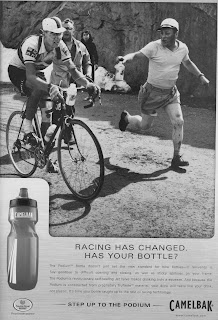 This year’s Tour de France started in Brest, a spiritual place for many in the Willesden. All the more poignant that former WCC member and TdF rider Ken Mitchell should be reunited with us once again.
To remind you of the story Ray Kelly was browsing through Pro Cycling when he spotted an advert by Camelbak featuring Ken Mitchell riding in the TdF during the 1950‘s. We posted this on the blog and through the wonder of the internet we received a message from a friend of Ken’s saying that he is now living in Australia and is still involved in cycling. Then Gladys received the following letter from Ken himself, saying that he will be over here next year –
Dear Gladys and club members.
I found your website when a picture of me from 55 years ago appeared in a magazine. A friend here, formally from Coventry, drew my attention to it. It certainly is me, taken on the Galibier but I had not seen it before.
Finding the website was a thrill for me to see how strong the club is and of course to hear that so many of the oldies were still involved. I met up with Jimmy Love last year, I had been invited over for the Start of the Tour and Jimmy invited me for lunch at the Pedal Club where I met a number of old Herne Hill track riders.
I am still involved in cycling, I live not far from our local track, an open air 375 metres that is not very steep, something like Herne Hill. For some years I have been running a track league on Friday nights. I started my racing at Paddington track at the Thursday night track league with Jimmy, Don Burgess and Reg Daniels. We were so young but very successful. The track league I run here is with ‘ A” “B’ and “C” grades plus juniors. I take people in as novices, young and old, and we have found a few champions. Both Sara Carrigan and Robie Mcewan were juniors who joined the club and were developed and coached by our own people until they were taken intro the Australian Institute of Sports teams.
I keep fit, I think when Camelback published my picture for their advert they assumed I was dead but I am not. I will be in England next May (2009) so I will make the effort to look you up in Wembley.
My very best wishes to everybody,
Sincerely,
Ken Mitchell.
This entry was posted in Miscellaneous. Bookmark the permalink.

One Response to Ken Mitchell – Update