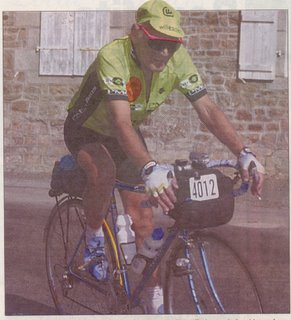 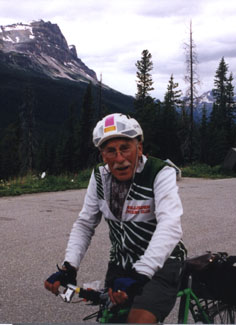 Seasoned Audaxers and Willesden ledgends, Karl Hrouda (above) and Jack Eason (right)set off for Sicily today to take part in the 1000km Audax. This event is run every two years and follows the coast road around the island.

This year the route takes them the scenic way to avoid the traffic chaos in Catania…..it goes up Etna!! Jack and Karl joined the rest of the Willeseden on the same event in 2004. However they had to pack at the half way point as they ran out of time.

Karl was recently featured in the local paper, the article was as follows

“CYCLING 1,200km in 90 hours and rolling across the finishing line with four broken ribs is an impressive feat for any athlete – let alone a 76-year-old grandad. Long-distance cycling specialist Karl Hrouda is not the sort to let a little crash get in his way.

He is preparing for a 1,000km ride around Sicily, despite being knocked unconscious by a car just a month ago. He was cycling to Cambridge to visit his son, when he stopped at a junction. Karl said: “How it happened, I do not know. I do not remember it. I was knocked out until the ambulance arrived, possibly up to 20 minutes.” He suffered cuts to his head and legs and most of his upper teeth were knocked out, making it hard to talk. But Karl is determined to fly to the Mafia’s homeland, on June 11, to compete in its ultra cycling event.

He said: “I am gradually recovering. I am definitely going to go to Sicily, and should be OK by the time I get there.” Karl will be joined by his cycling partner, Jack Eason, an 80-year-old, who helped ease him back into the saddle last week, with an `easy 300km training ride’ to Somerset and back.

Karl and Jack, who are members of the Willesden Cycling Club, will have 75 hours to complete a circuit of the Mediterranean’s largest island when the race begins at 8am on June 13.

Karl said: “We will have to average a minimum of 13.6 kmh to finish in time. Hopefully, we can go a bit faster than that to give us time to grab some food a little kip.” He knows it’s important to get some rest during ultra events all too well. He is one of only three Britons to complete long-distance cycling’s blue ribbon event, the Paris-Brest-Paris, six times.The 1,200km race from the French capital to the coast of Brittany and back again is run every four years.

Karl finished in every event since 1983. It was lam on the final day when Karl crashed in 2003, 100km from Paris. He said: “I had’t slept enough and crashed, but I got up and finished just inside the 90-hour limit. Only later I found out I fractured four ribs in the fall. I suppose it was quite an achievement to finish in that condition.”

Karl, who took up cycling in his 50s, does not plan to stop any time soon.He said: “If I was sat in an armchair every day watching TV, then I would not have the same fitness level. Cycling has its downsides and accidents do happen. But overall, it has been great to me.”I lost my wife last year and I have been depressed, but the cycling kept me going. We have not got that many years to do this, so while we still can, let’s get on with it.”