Saturday! Cold, grey, damp and windy. Not a day you would choose to go and watch a cycle race at Hillingdon. However Richard Jerome’s performance in the Cat 3/4 Support race to the prestigious Hillingdon GP made the trip worthwhile.

I joined a knot of Willesden supporters to witness Richard ride a mature and calculated race, where he was constantly near the front of the group looking lean, keen and mean. The new squadra kit looks really fresh and sharp in the peloton, which must give any Willesden rider a psychological boost. To me Richard looked to really dominate the race and he was looking a very real threat. 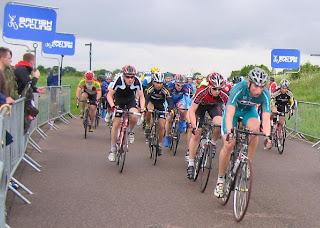 At the bell Richard was in a good position as the peloton swished past and disappeared from our view. We waited expectantly for them to round the final bend. As they did we spotted Richard, still in a winning position. It was a long slog up to the finish line, directly into the teeth of a nagging headwind.

Still Richard was looking good; could this be a podium position? Suddenly Richard disappears from the outside edge of the track. Had he blown? Where was he? A few seconds later he reappeared on the inside of the track with good space all around him. He had a clear line to the chequered flag. “Push Richard, push, push, push” we all urged. In the last 100 metres his opponents just had that ounce or two more of energy and our man finished just a second or so behind the winners. It was close and a highly creditable 6th place.

Well done Richard. It going to be even more exciting when you have a few more Willesden team mates to join you. What a great summer of Willesden racing it is going to be.