Posted on 07/Aug/2007 by Rich Cooper
The improvement in the weather has meant improvement in times.
Richard Melik riding only his 2nd 25 mile in the Hitchin Nomads event in Bedfordshire took second place with a personal best of 58.30. He only recently returned from Austria where he took part in the Ironman Competition and broke the 10hour barrier for the first time recording 9hours 50mins. Richard’s partner Jenny Gowans won the 30-34 age group in 10hours 15 mins which qualifies her for a place in the World Champonships in Hawaii. 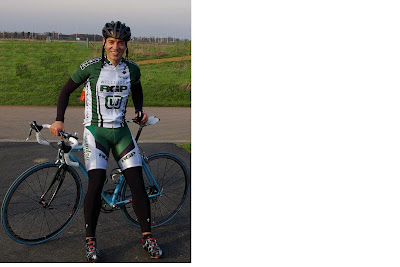 Staying with our triathletes. Melissa Arkinstall finished 3rd in the 30-34 years group in the Olympic distance event in the London Triathalon yesterday. Her headset on her competition bike decided to break just 24 hours before the start! However this, nor the oppressive heat affected her time and Melissa finished in 2hr 22. She came 5th in her category and posted the fastest run split. She now has the coveted sub-2hr 30 time to go in the “Fast wave” next year.
Melissa also raced at the Wakefield triathlon and qualified for the World TriathlonChamps in Hamburg on Sept 2nd, so the GB kit is coming out again! She also did the Dorney team relay tri last weekend, finishing in fourth place. Later this week she is doing a 4-up and the National Team Relays at Holme Pierre point (doing both the team event on Saturday, followed by the individual race on the Sunday). Phew!
Claire Beckwith also took part in The London Triathlon and finished in an excellent 2hours 27mins 59secs.
Gill Reynolds has been making up for lost events and went down to Wales to ride the Abergavenny 10 on Thursday finishing 4th in 25.46 and then she was 4th again on Saturday in the event organised by C.C. Topp on behald of the Welsh District Association.
Ed Packard after his 200km night ride in the Dunwich Dynamo last weekend sped round in the Charlotteville C.C. 10 at Farnham to record a personal best of 22.41
Gladys Purdy
This entry was posted in Miscellaneous. Bookmark the permalink.