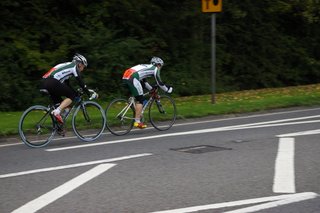 In the London and Home Counties Vets 25 at Maidenhead Richard Jerome recorded a 1.03 35 in difficult conditions as the event was run in wet conditions and parts of the road were extremely damp after the heavy rain. One third of the field did not start and several did not finish as they punctured on the gritty roads.

Meurig Rode the Welsh Hillclimb championships on 2nd October. Unfortunately he messed up his pacing and rode too easy!! Still came in 4th though.

Gill Reynolds was the fastest lady in the Cambridge C.C. 10 mile event over a hilly course returning in 27.44. Also on Sunday two of the club’s youngest life members- Jacqueline Harris and Susan Doel ran in the Nike 10km event at Hyde Park rubbing shoulders with pregnant Paula Radcliffe. Before Jacqueline and Susan were married they were known as the Purdy twins-Proud Mum speaking!

The annual interclub 2 Up 10 mile with the Westerley took place at Gt.Missenden over the weekend. The fastest pair were Dave Newman and Malcolm Woolsey of the Westerley R.C. with a time of 22.50. The next 6 places were filled by Willesden members-father and son team Roger And Tony Woodford did 25.50, whilst father and daughter team Chris James and Jayne Payne managed a 26.40. David Walters and Surendra Patel 26.47,Ron Johnson and Rob Ross 29.23, Brian Wright and Hilary Pandya 29.47 and Mike Ellison and Ray Kelly 29.54. Second claim members Maria Docker and Keith Elliot also took part and finished in 30.39.

The Westerley also held their hillclimb at Longdown Hill near Princes Risborough and Willesden members took part. Steven Ayres finished in 3rd spot in 2mins52secs and Darlene Rini from the U.S. who rides with the Willesden on clubruns 3mins21secs. Mike Ellison, no doubt tired from his efforts in the 10 mile time trial recorded 4.14.

Gill Reynolds traveled to the New Forest to ride in the New ForestC.C. 10 and recorded 26.54.
Less fortunate was Richard Jerome who punctured in the Hillingdon 25 at Marlow whilst his Dad Mike rode his first event for several years and finished in 1.16.33.