Cycling Films at The Riverside Studios 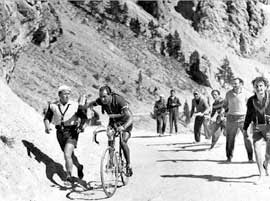 In the past I have been to a couple of Cycling film programmes at the Riverside Studios in Hammersmith. It ‘s a good afternoon out with a good helping of nostalgia. This is roughly an annual event and the next one is scheduled for Sunday 24 th January 2010.

According to cycling weekly the programme includes three films, they are –

British time trial championships; which includes the junior “25” and 12-hour from 1979, by RTTC film archivists G. and J. Turner,. Plus there is newsreel footage of racing in Britain in the 50s, 60s and 70s.

Finally completing the bill is Life on two wheels biking around and about Copenhagen. Self explanatory really!

Tickets can be booked directly at www.riversidestudios.co.uk, or calling the Box office on 020 8237 1111.