Mike Ellison did a solo 400 DIY Audax last Sunday morning, connecting the three cathedrals of Westminster, Canterbury and Winchester. No wonder he was on his kneees by the end. Here’s his report.

Cathedral Crusade 400K
As expected no-one turned up to try the ride. Obviously too hard! The ride started off very well with a puncture in the first 200m! For various reasons it took an extremely long time to fix and I eventually restarted at 06:00. 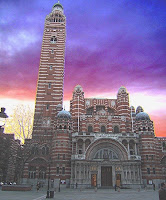 Westminster Cathedral at dawn
The first leg to Canterbury went very quickly – 92K in just over 3 hours, which is probably a little too fast for me and I may have paid for it a little later on. The A2 is OK – nice and wide with plenty of cycle lane space. The road rolls a bit but it’s not too bad. I didn’t stop on this bit which is why it went by so fast. Made a mental note to slow down a bit.

The next leg – 203K to Winchester – was a bit different.
Firstly it was into a south-westerly headwind. This was a mistake. I had looked up the weather conditions and so I knew which way the wind would be blowing. I had decided to ride the course in a clockwise direction and for some unknown reason I didn’t change my mind. It would have been much more sensible to ride it anti-clockwise direction and get the benefit of a tailwind. However it was too late for that. 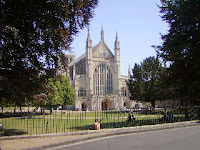 Winchester Catherdral
Secondly, even though it was a main road bash I managed to lose the route on a couple of occasions and ended up doing an extra 25K. I took the direct route through Ashford, Tunbridge Wells, Crawley, and Petersfield and it was OK – very little traffic and mostly a good surface. I had to stop a couple of times to refill the bottles, but that was it. Finally arrived at Winchester at 21:00 – the computer said 330K in 15 hours. This equates to about 300K in 13.5 hours which is possibly a little fast for me, especially as I had a lot of headwind and no-one to draft behind.
I didn’t need to stop for long because I had plenty to keep me going but then I saw the ‘Big M’ sign and weakened. After a couple of burgers, a hot apple pie, and a large coffee I finally set of on the last leg at about 22:15. This one was the slowest. I have never been much good at judging pace and rely on the computer to keep my concentration. At night I can’t see that so I am lost. As it turned out I averaged a tad over 20kph for the 110K so it took me just over 5 hours. It was a relatively easy ride – A33 then A30 – and the only problem was at Basingstoke where once again I lost the route. I couldn’t find a sign thar said ‘London A30’. Eventually I found a couple of friendly plods who sorted things out and put me back on course. Once again I didn’t stop on this leg – and I bottled out of ending back at Westminster, instead heading straight home.
Finally arrived home (Ickenham) with the computer reading 440K in 21.5 hours. This equates to about 400K in 19.5 hours which was just within my maximum aim of 400K in 20 hours. I would like to have done it a little faster – 400K in 18 hours – but it was still a good ride for me.

Overall it’s not a particularly challenging ride, and I reckon a strong audaxer could easily get round in well under 16 hours, depending on how long they stop for. Being a main road bash, route finding is a doddle except in the main towns, so if you have a go then take maps for the towns sections.