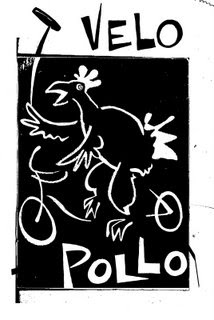 Last week in a jolly daring adventure Bunty-Jayne managed to seized the inner most secret of the Westerly CC. At great personal danger, her plan was to infiltrate their ranks posing as an ace bicycle polo player. In a brilliant wheeze to gain their confidence, she choose as her polo steed a full-on track bike complete with drop handle bars.

After thrilling match she managed to prise Captain Caldicott’s devastatingly tasty Chicken BBQ recipe and brought it home to the blog. To protect the guilty and incriminate the innocent the Squadra Verde has suitably renamed it Velo Pollo.

Bike polo: not so much Pimms and ponies as buckets of beer and barging about a lumpy field in the west London twilight. This was an epic contest, pitching the forces of Good (well, me and Jim Mears for Willesden) against the, frankly, rather Dodgy (“Captain” Roly Collicott and the Chuckle Brothers for the Westerley).

We were outnumbered and expecting things to be a little rough… then we were handed golf clubs. Oh dear. My mount was a feisty little track bike from the stable of ace Gregario and compulsive trainer Mike Diggins. Lovely if you were in a velodrome or born before the freewheel was invented (Rocco?). Mike had thoughtfully lowered the seat – perhaps so that my knees would would protect my ears. They didn’t. Jim sat tall in the saddle of what initially appeared to be a very sturdy mountain bike. His noble form was like a bright torch against the darkness that was Westerley. Sadly, however, his mount pegged out 5 minutes in to the game and Jim , nobility surrendered , spent an awfully long time bent over it . His beam still shone though.

From my position – usually face down in the mud as I fell off again – things did not look good for the Willesden. The other side’s tittering henchmen, Ginger (Dave Newman , scourge of the Amersham Road TTs ) and The Other One (Malc Woolsey, scourge of nurses everywhere) couldn’t stop scoring. The rather lovely umpire, Paul Barker, was on our side from the start after I passed him Darlene Rini’s telephone number; but not even he could hold them back and they raced into what appeared to be an unassailable lead.

I was beginning to wonder when the date-rape drug slipped to Capt. Collicott would kick in , when suddenly it did , and much better than expected ! Instead of falling to the ground spread-eagled ,as per the information leaflet , he started knocking the ball repeatedly into his own net – what a decent chap he is. We were catching up! Then the skulduggery started: the Titter Twins dismounted and started running with the ball, Ginger tried to make off with my golf club wedged firmly between his legs (Mike Diggins and Richard Jerome will thank me for that ) and I saw Jim Mears,now back in the saddle , on the receiving end of a nasty smirk from The Other One. Well rested, Jim scored some terrific goals in the final few minutes. At five-all, the umpire wrapped it up, as the crowd had long since stopped watching our shennanigans and , more importantly ,the grub was fast disappearing.

I had concussion , but I’m pretty certain we all had a really jolly time !

PS Captain Collicott may have been affected by the drug for some hours afterwards as I was able to extract from him his tightly guarded recipe for the rather scrumptious chicken . Please note that Willesden Cycle Club is in no way responsible for the outcome of following this recipe .

Note: this recipe is based on something I got from my Indian guru many years ago high in the Himalayas when I was searching for the meaning of life and the answer to constipation, but I have adapted it countless times since. Now, it isn’t very authentic, but it is quite quick and suitable for a reasonable-size gathering. I do it all by guesswork so the quantities are only a guide.

12 drumsticks (of course, you can also do thighs, or chicken quarters, but adjust quantities accordingly.
Some lemon juice and salt
Ginger: about 2 cubic centimetres (either keep root ginger in the freezer and grate what you need, or buy the very convenient (i.e. cheating) frozen crushed ginger available from Asian sections of supermarkets).
Garlic: about 4-6 cloves, crushed preferably, otherwise very thinly sliced/chopped.
Garam masala: about half a spice-pot-full Perhaps 4 heaped teaspoonfuls.
Yoghurt: about 200 mil
You can add red colouring if you want it to look ‘trad colour’, although I don’t.
1 Bicycle Polo Match (optional)

Skin the chicken and cut two or three deep slashes into the flesh. Sprinkle with lemon juice and salt and leave for an hour or two (although it’s often less if I’m in a hurry).

Make a paste from the yoghurt, garam masala, garlic and ginger. Drain off the juices from the chicken and coat each piece of chicken with the sauce. Leave to marinate overnight (preferably) in the fridge and cook on BBQ or in the oven (something like 40 min at 140 deg C, but that’s a wild guess).

As I recall, the authentic dish has tomatoes and green chillies. I used to make the sauce in two batches (simultaneously), with far more chilli mix in one, so that the spicy fans and the wimps could mix and match by using more or less hot sauce. Also, the tomatoes make the sauce runnier, which is fine for a wet curry, but I find a thicker paste works better on the BBQ.

Finally, I’d again stress that the quantities are very personal and if you’re feeling spicy, don’t hesitate to whack in extra garlic, ginger and garam masala.