Yesterday Mark Brooking and Wendy mears completed their Randonnee Round the Year Award (riding a 200km ride each month of the year). Mark’s summary of their last few rides follows.

September saw Wendy score first with the Beech Hill 200, later in the same month she accompanied Mark and Jim Mears on the Hauxton 200. It only rained non-stop for half the day and the route was very well thought out with some superb café controls.

October saw the Wendy-Mark duo return to Great Dunmow for a repeat of the ‘Dick Turpins Day out’ permanent ride. It was a lot easier to ride without the snow & sub zero temperatures of the previous edition in January.

November, Wendy went up to Cheshire for the ‘Eureaka’ a superb event with two brilliant café controls. Being at the tail end of the field Wendy had ample warning of the black ice on the course. Three rider broke bones on that day. Our hero completed the ride unscathed. On the same day Mark rode the Manningtree perm starting from Saffron Walden. Start time was carefully planned to get to Wally’s for breakfast. Deniece Davidson met Mark there and acted as a local guide for the end section. A worthwhile event that was all over by 18:00. 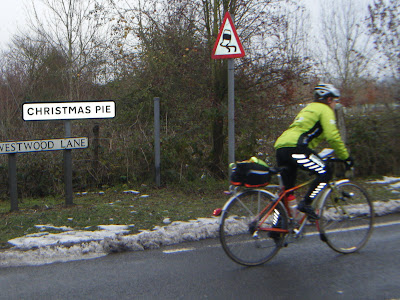 A seasonal reminder
December looked grim with snow & freezing conditions prospects were not good. We had both entered the Great Kingshill 200. The organiser worked out an alternative route using treated roads which we chose to use. As there was no ice on Sunday morning we gave it a go. Progress was good until we hit the Surrey hills where there was plenty of snow. Luckily it wasn’t on the road and the interminable climb up to Hindhead was painfully slow. We made it to Alton with minutes to spare and chose to use the remaining daylight to get off the high ground and make a dash for Twyford. The last 23 miles took Two and a half hours. The killer climb through Skirmett & Fingest to Boulters End was murder as the frost began to grip the verges. 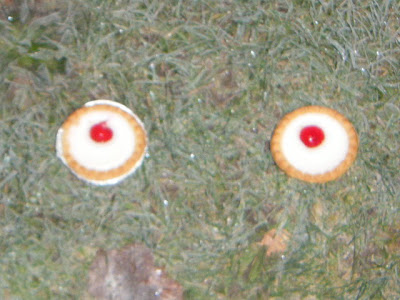 Mark’s “Scary Bakewells
We finished the last “Scary Bakewells” and froze on the long decent into Wycombe. Soon to warm up on the climb back up to Great Kingshill where a warm welcome awaited. 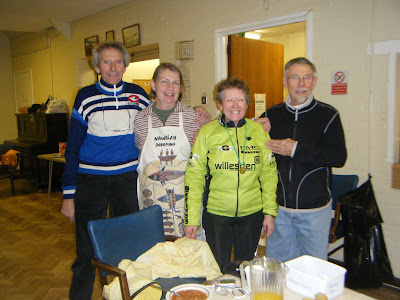 Wendy receives her Chocolate medal
Wendy was presented with a special (chocolate) medal on a Willesden Green Ribbon. Jim very kindly Chauffeured us home for a well earned glass of bubbly. Both of my water bottles had frozen at the finish. Job done – a new challenge for 2011 calls…………………