Audax Round the Year Award – Update

Posted on 16/Aug/2010 by Miles Back
Mark Brooking and Wendy Mears are making good progress in their quest to ride a 200km Audax event each month in 2010. Here is Mark Brooking’s latest report on their recent rides, plus the odd 600km ride he has done, just for “pleasure”.
Miles Back

RRTYA
Its been a while since the last report . Both contenders for this coveted award have made it past the halfway point

Mark rode his 31st Dorset Coast – its becoming a bit of a habit now! Then Mark & Wendy went to ride the Witham westerly – another visit to Wallys café and Wendys first sub 12 hour ride. A gent relying on GPS technology passed us in several directions very close to the finish thue ensuring that we weren’t last!

Mark rode the Hop Garden event in Kent – It took as long as the dorset Coast and was almost as hilly!
Wendy came back from a trip to america and slipped in “The Anoracks Delight” just before the end of the month.

Wendy rode the “Taste of the Test” permenant with Jim.
Mark was inveted up to Edinburgh to ride Sonya’s 600km Event – which was a brilliant ride of two loops which sneaked into England before returning to base
and heading across to Loch Lomond & back in the rain. 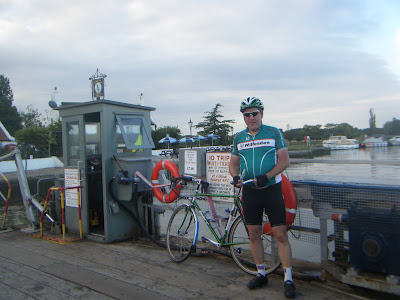 Mark taking a breather on the Ferry as part of his 600km
July
Wendy rode another 200km perm first
Mark Went up to Seething Near Norwich with Paul Stewart to spend the Weekend in a field in between frantic bursts of activity on the Seething 600km. He last rode this event in 1991 and was pleased to meet up with Paul & Jaqui Denny who created the event back in the early ’80’s

Wendy is off to ride the Marlborough Connection on the August Bank holiday. Mark and Wendy are also scheduled to try out Wendys new lights on the Anglian 300km Diagonal.
Mark Brooking