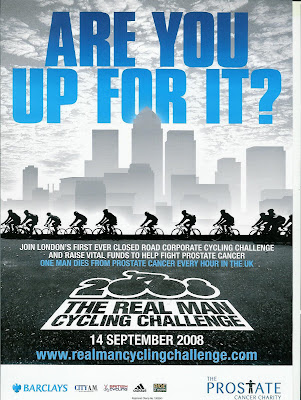 Ian Why was at Hillingdon yesterday where he met Graham LeSaux who was promoting his charity for Prostate Cancer. IAn wa most impressed with Graham’s commitment to cycling and his charitable cause and suggested we spread the word via the WWW (World Wide Willesden)

I have attached the poster for the charity I spoke to you about earlier.

Graham leSaux, ex Chelsea footballer, is one of the charity’s ambassadors who was giving interviews to BBC radio London and TV plus various radio phone interviews for commercial stations He also rode round the circuit with Tony Gibb for the TV.

Graham seemed to know quite a lot about cycling and rode very well, he also has a holiday home on Majorca and made enquiries about training camps on the island.

He is now cycles and plays tennis to keep fit.