“Mine’s a large one” – an interview with Jayne "Bunty" Paine

Here’s how she did it, in her own words. Well, words transcribed by A. Bloke

How does it feel to be a national champion?

JP: “It feels brilliant and I keep telling people who come into the shop, but they don’t know what to say. People keep asking when I’m going to be in the Olympics – they don’t really understand at all. I kind of say “old age Olympics” but that doesn’t sound so impressive to them anymore. Everybody at the club understands, though, but they’re all dead old.”

Did you think you’d get a Masters gold when you started track training at the turn of the year?

On day one you took a decent fourth in the 500m time trial. You followed that up with a strong ride in the 10km scratch race, where you took silver after being outsprinted by Janet Birkmyre in the finale (NB, Janet is the women’s Masters equivalent of Mark Cavendish and usually wins everything). 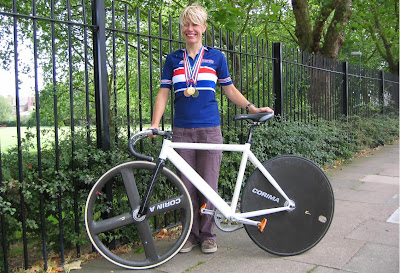 On day one you took a decent fourth in the 500m time trial. You followed that up with a strong ride in the 10km scratch race, where you took silver after being outsprinted by Janet Birkmyre in the finale (NB, Janet is the women’s Masters equivalent of Mark Cavendish and usually wins everything).

So you had a silver and you hadn’t even got to your strongest event. What happened with the 2km pursuit on day two?

JP: “I’d done a really good time of 2.39 in training and I knew if I could do that time again it would be a gold. Janet’s personal best is 2.37, but I knew she’d been suffering from a chest infection – to my relief because I thought I might have a chance!

(At this point Jayne and I have a disagreement about sporting ethics, which concludes with JP insisting that she knows “ several coaches who have offered to rub Janet’s chest for her”. I realise I can’t win and carry on)

“It was an agonising eight laps – you have to try to conserve your strength but also try to use it all up at the same time. It’s a horrible thing. I didn’t know how I’d done until I got off the bike and looked at the scoreboard. I was a bit surprised to see such a slow time”

(NB – 2mins 42secs is hardly slow, but was only good enough for bronze. Janet beat Jayne by a second-and-a-half for silver, and she in turn missed out on gold by just two hundredths of a second).

“It seemed to me that because that was my strongest event that I wasn’t going to get a gold medal in anything. But I was quite philosophical about it.”

JP: “I actually thought I wouldn’t bother hanging around for the points race. I thought ‘It’s been a good weekend and I’m knackered and I’ve had a big lunch now and I feel like going to sleep. We could pack up and be home at teatime’. But I also thought I’d kick myself if I didn’t do it.

“I didn’t expect to be able to perform, though. But from the moment I thought I’d do it, I was desperately trying to think of a tactic I could use to shake Janet off my wheel. I thought I’d have to try to take a lap, but with little left in my legs I didn’t know how I’d do that. As it happened, it was all taken out of my hands when two girls went off the front and I managed to join on and after that it was full tilt. I just tried not to do too much on the front.”

I thought you actually rode a tactically smart race. You conserved energy where you could, but you also chased down breaks and got yourself into good positions for the sprints. You were also the only rider who was using the height of the track to watch what was going on.

JP: “I love being up there. I love swooping down. I knew I was picking up points, but I didn’t know how many or how many points other people had. I was racing at the end of my tether. The final sprint took everything out of me.”

When did you realise you’d won?

JP: “It was only when they called my name out to pick up the gold medal! I thought I might have got silver, but I wasn’t sure. We were standing by the podium waiting for our snog and handshake but we didn’t know until they actually called out the medals.

“Then you were shaking me and saying ‘You’ve got it! You’ve got it!’ and even then I didn’t really understand. I was still in my sweaty lycra and beaming and I was so excited that I got a blue jersey. There was a bit when I felt a bit tearful and I had to remind myself that this wasn’t actually the Olympics and hold myself together!”

So you’ve got a full set – gold, silver and bronze.

JP: “Yes. They clink around a bit and they hit my nose when I’m cycling. I think this one’s really bronze, you know. The gold one isn’t real gold but the Indian lady at work thinks it might be gold-plated and she has an eye for these things.”

“I wear them all the time. I’ll be wearing them on the next club run. Oh I forgot, I don’t do club runs.”

Were you wearing your jersey at work today?

JP: “Yes. I didn’t have any other clean clothes with me.”

Is there anything you’d like to say to your adoring public? 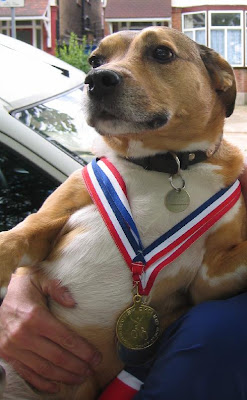